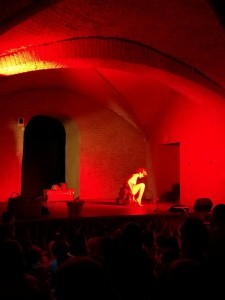 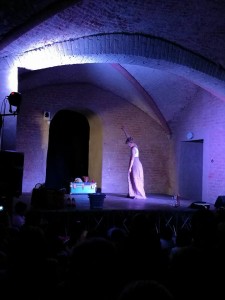 Fairy tales can still speak to contemporary people?
And the elements of nature such as milk, wine, fruit can take a magical value?

In this dance show, inspired by the fairy tale Snow White by the Brothers Grimm, the food is an element of power and magic.

Snow White’s stepmother, powerful alchemist, knows the power of food, preparing magic recipes combining milk to wine, stirring with wisdom the flavors in the copper pot, until the poison apple to subdue her stepdaughter to her power.
Food becomes the real star of the show, its evocative power, its ability to transform the body and mind of those who ingests.
And the question for the contemporary world remains open:

What is the meaning of eating? What Alchemical transformation food produce inside us?
At the end of the show Snow White and her Stepmother, two sides of the same character, fade, ethereal and innocent the first, physical and passionate, the second. What remains in the forefront are milk, wine and the apple.
Show music is original and ranges from opera, electronics, composed specifically for the show.

The show is part of the Apple’s trilogy.
The other two paintings of the trilogy are dedicated to the apple as the forbidden fruit of the Garden of Eden and as the fruit of discord among the goddesses.

The second and third part of the trilogy will be, in fact, devoted respectively to the episode of the expulsion from Paradise and the competition among goddesses that was the cause of the Trojan war

Link to the show:

Technical requirements:
stage or platform of a minimum size of 20 sq.m.
a CD player
2 headlights